Put together this beach themed sand writing tray to encourage some sensory mark making. Children will develop physical and literacy skills through this engaging learning activity. 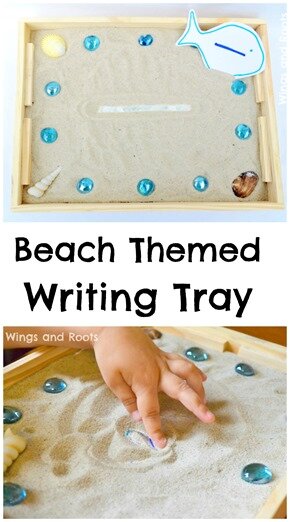 Sand writing trays aren’t a new idea, I’ve seen many about (My favourites being from The Imagination Tree – be sure to go over and look at them, they’re wonderful!) and I wanted to try them out myself now that S (2.4yrs) is becoming more and more interested in mark making.

Writing trays are perfect for allowing children to practise early writing skills in an engaging and sensory way. Often preferring to use their fingers to mark make, this way of exploring writing skills is fantastic in the early years and for encouraging reluctant writers.

We are currently exploring an Seaside theme and decided to create a writing tray based around this, using sand. 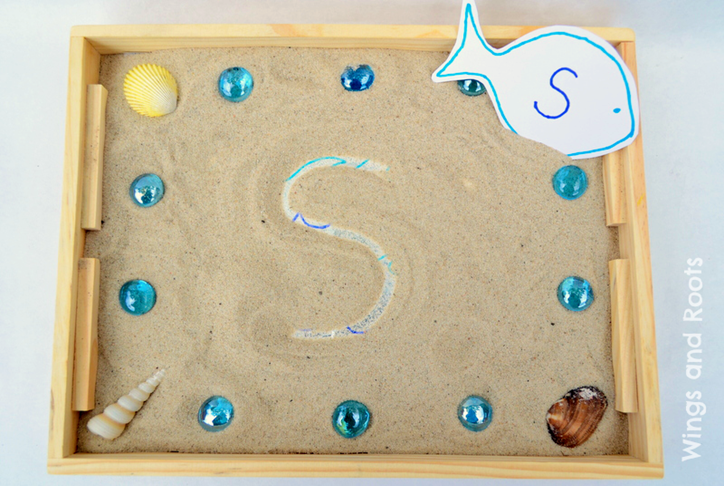 It is so simple to put together; it takes just a few minutes to make the sand-filled tray. We used a wooden tray (ours used to hold a puzzle in it) and we lined it with some foil which I had drawn wavey sea-style lines across, so that when marks were made it revealed itself. This is completely optional though, just an added bit of nautical fun! 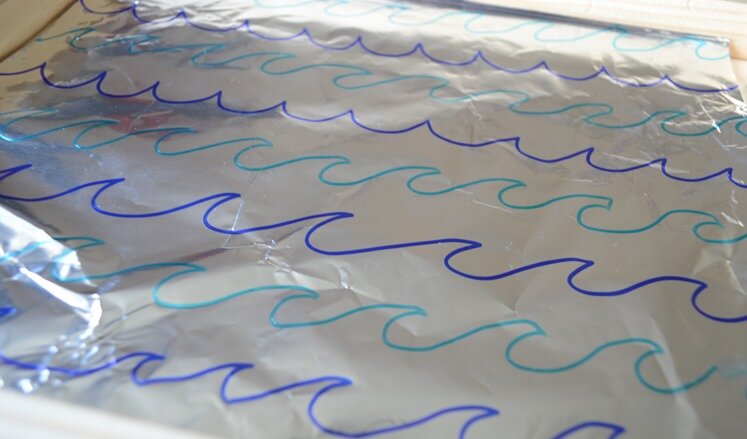 We then filled it with some dry sand, covering it evenly. We added a few glass pebbles

around the edges for added interest but mainly left it neutral so there was more space for mark-making. 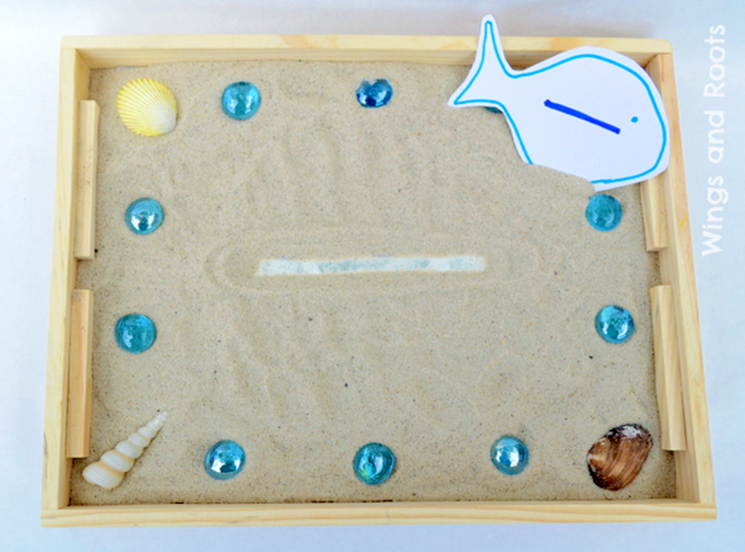 The writing tray would work well just left like this for children to explore and create but today I wanted to add some prompt cards to encourage specific marks. S is still in the early stages of mark making so I made some cards with the pre-writing shapes on and left them by the tray.

To make them I drew around a fish-shaped dip bowl I have onto some card and cut them out, writing a variety of shapes and letters on them.

At first she felt and picked up the sand, allowing it to slip back through her fingers. After that she set to using her finger to mark-make. She made lines and dots to begin and then onto circles. 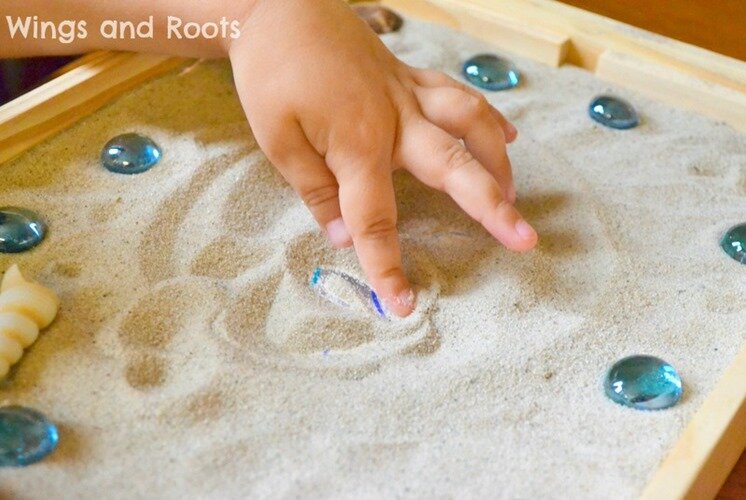 She noticed the cards and I gently encouraged her to attempt the shapes. She really enjoyed copying the shapes on the cards and kept asking “what’s this one mummy?” and repeating my reply as she carefully made the shapes in the sand. 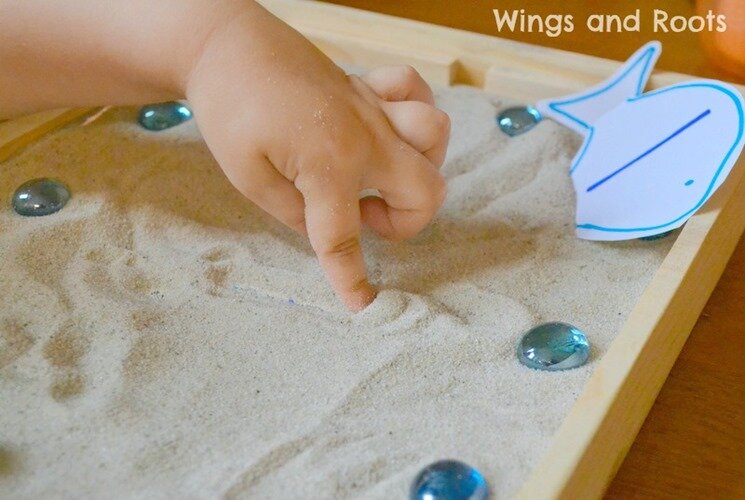 Don’t forget to ask your child about the marks they are making and encourage them to explain the meaning behind them as this forms the basis for reading and writing later on. 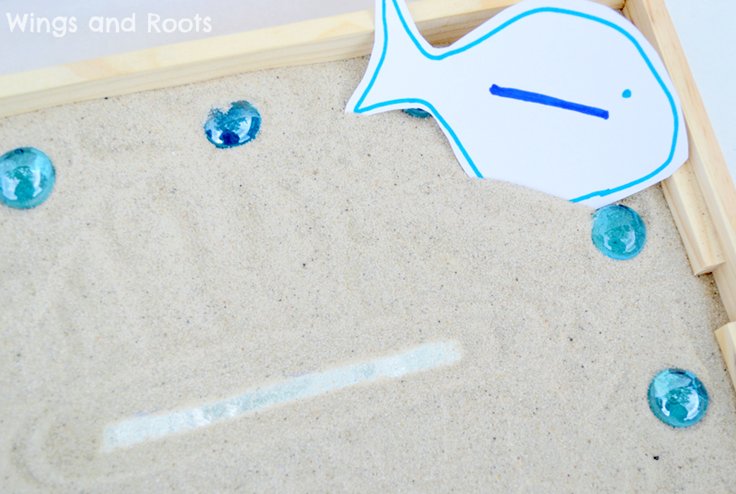 In the Early Years Classroom 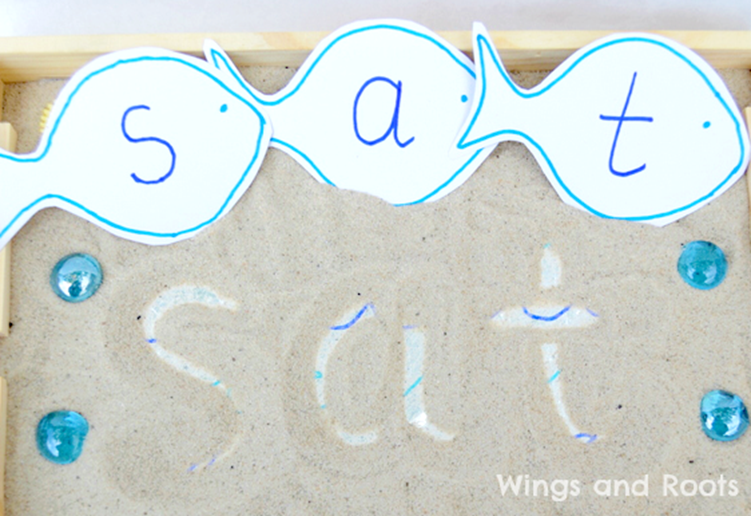 It’s wonderful to see children so interested in Literacy and eager to explore mark making, even more so when it’s through an informal and sensory-rich activity like this one.

Did you enjoy this activity? If you did I’d love to hear from you over on the Wings and Roots Facebook page!